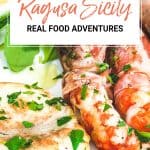 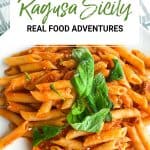 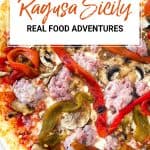 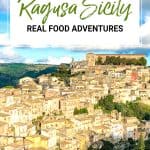 If you were following along with my Insta stories at the beginning of November, you may know that I was lucky enough to be eating real food in Ragusa, Sicily. I organised the trip for my hubby’s 40th birthday because Italy is one of his favourite places, but it was also a perfect opportunity for a real food adventure.

This holiday was all about recovering from birthday celebrations or should I say, detoxifying following much too much indulgent food and wine! We wanted to use our time in Ragusa to recharge, reboot and eat some excellent real Italian food. I think we did a pretty good job but as we ate all our meals in restaurants eating 100% real food, was sometimes a challenge. Nevertheless, we tried our best!

And to my surprise, on my return, I had a good result on the scales. More on that later. First, let’s talk about food!

Our Sicilian real food adventure began in Ragusa Superior, known as the modern part of town. It would be our base over the next six days. Because we arrived late in the evening, we asked the concierge for a restaurant recommendation, and she told us about Tipico. We dumped our bags and went straight there.

What’s the first thing to do when eating out in Sicily? EAT PASTA!

My dish of choice was this beautiful Ravioli. Little pillows of pasta, stuffed with creamy, herby ricotta and submerged in a rich, tomato sauce. The sauce had been slow-cooked for hours, resulting in melt-in-your-mouth pork pieces. Heavenly.

Hubby had the Broccoli pasta. He devoured it, but unfortunately, I was not a fan. Don’t get me wrong, the flavour was good, but I found the dish as a whole much too dry for my taste.

If you go to any beachside restaurant in the Marina, be aware that the main ingredient on the menu, and quite rightly, will be fresh fish. Pure and simple, unadulterated fresh fish. Alternative options for non-fish-eating peeps will likely be few and far between.

My mixed fish plate came with a seabass fillet, a swordfish steak and prawns (shrimps). The fish was pan-fried in olive oil and served with fresh lime. Uncomplicated and satisfying.

Hubby went for one of the only non-fish dishes on the menu. Typical!

After a day at the beach, we didn’t feel like hiking too far to get dinner and found ourselves back at Tipico, where we were in for a real treat.

My pork fillet had a crispy outer crust with an intense masala flavour. Almost nutty. By contrast, inside was loaded with gooey, cheesy goodness.

The dish came with caramelised pear wedges on the side. I’ve never had warm pears in a savoury meal before, and I was pleasantly surprised. The pears were soft inside with sweet crispy skin, and they helped to mellow the strong masala flavour.

But overall the Masala in the recipe made the dish too rich for me, and disappointingly I couldn’t get through it. Not like me at all!

The ribeye steak was served medium as per hubby’s request, sliced and fanned across the plate with a side of crispy rosemary potatoes. Wonderfully simple.

Day three was all about doing as little as possible. We started with a late, large continental breakfast, had an hour of relaxation in the spa and then read until our tummies starting rumbling. Must be time for dinner.

We both fancied a light bite and were intrigued by the menu’s Rigatoni pasta. A similar option was available on many local restaurant menus, so surely that meant this was a special dish? And yes, it certainly was.

Hand on heart, this was one of the best pasta bakes I’ve ever eaten.

From what I could tell, the base was a generous layer of rigatoni pasta coated with a herby tomato sauce. Then there was a layer of slightly sweet and spicy salami, followed by a second layer of rigatoni. Next up, a layer of torn, fresh and seriously aromatic basil. And just before you think it can’t get any more delicious, there’s a layer of crispy aubergine (eggplant). The dish was made complete with a bountiful topping of breadcrumbs and caciocavallo cheese.

Oh, la, la. What a good choice. My mouth is watering just thinking about it!

On day four, we navigated our way down the many, oh so many steps as we ventured into the old town, Ibla. One of the most beautiful places I’ve seen. I often found myself stopping in awe wondering how on earth the buildings were able to seemingly overhang sheer cliff faces, one on top of the other as if by magic. So much history waiting beyond every corner. And, of course, a tasty lunch awaiting us.

When we came across the restaurant ‘That’s a Moro’ we had to go in. The entire building is bursting with art, furniture, pottery and treasures all created by local artists. So much so that the owner refers to his popular eatery as a restaurant museum. This place is bright, cheerful, quirky and full of Sicilian spirit. Beautiful. And so was the food.

I had this perfectly cooked salmon with veggies and ordered extra grilled vegetables on the side. Don’t judge me, I had done so much walking I had built up a hunger!

Hubby fancied the pasta. It took him all of two minutes to devour this little carb sensation.

After lunch, it was time to head back to the hotel, which took ages because of ALL THE STEPS. Man oh man, I thought my heart was going to explode. But, such good exercise! No wonder all the locals are super fit. I don’t think it would be possible to be overweight if you lived here!

On route, we stopped by a little bakery and got ourselves a snack in case we were hungry later in the evening.

There doesn’t appear to be a direct translation for this bread. Various sources give it the name Lasagne Bread, Tomato & Cheese Pie and Stuffed Flat Bread.

To me, the name Lasagne Bread works perfectly. The texture and flavours are what you would expect from a lasagne. At first, this comes as a surprise, as there is no pasta in this bread. Just thin layers of dough folded back and forth, alternating between scrummy layers of cheese and tomato sauce.

We first came across this bread at breakfast, as it is served every morning at the hotel. But the smell (although delightful) was too garlic-heavy for breakfast time, in my opinion. Not ideal before or after brushing your teeth!

But, extremely appetising any other time of the day!

On day five, we jumped in the car and headed 3 hours west of the Island to Scala Dei Turchi to see the ancient white cliffs and then back inland to Agrigento to bypass Greek ruins. After all that driving we had lunch overlooking the sea and ate more pasta, and we were ready for it!!

When we had no energy left for sightseeing, we took the scenic route back to the hotel adventuring (and braving) the winding mountainous roads. All great fun until the thunder and lightning hit and the rain started to pour. We arrived at our hotel four hours later, and by then it was time for dinner. I had worked up an appetite. It was time for steak.

A good quality piece of beef = a good steak and this was a great steak. So, not much more to say about that. The greatest surprise to me about this dish was the small diced mixed vegetables drizzled with balsamic vinegar. It showed me the importance of spending a few extra bucks on a good quality balsamic vinegar. It’s capable of transforming your ingredients into something incredibly special.

Our final day in Ragusa was spent back in Ibla, blissfully wandering around the local shops, landmarks and park.

Today we had our hearts set on experiencing some of our favourite Italian foods we often eat at home, here in their true authentic style. So for lunch, we decided on Spaghetti Carbonara.

Hubby had a concerned frown when his plate of Carbonara arrived. He whispered, “Why is it so yellow?”.

He was eating a ‘real’ Carbonara, made with fresh pasta and a sauce of egg yolks, cheese (Pecorino Romano and Parmigiano-Reggiano) and starchy pasta water. All naturally yellow ingredients.

Over the years, he has become accustomed to eating supermarket versions that include ingredients like cream and cornflour, making them white in comparison.

A yellow, authentic Carbonara, made by an Italian chef. “Eccellente!”

For dinner, we ate pizza at Konza. We chose Konza because their pizza bases are made using Ancient Sicilian Grain Flour. Flour that is wholegrain, high in protein, fibre and low in gluten. Perfect for a real food diet.

Hubby had the Primavera, a pizza loaded with a herby tomato sauce, mozzarella, baked ham and a medley of vegetables. The flavour combo was insane.

I ordered a classic Margarita, and it was exceptional. The crust was thin, light and crispy. Just what you’d expect from an authentic Italian pizza crust. The chef scattered fresh basil leaves over the bubbling mozzarella straight from the pizza oven. The fragrance was sensational.

The perfect end to a perfect day.

After a fabulous six days in Sicily, it was time to go home. Our trip of eating real food in Sicilian real food adventure was coming to an end. But not before one final pasta dish near Catania airport.

Pasta in a tomato sauce with aubergines hidden under a mountain of creamy ricotta, and a sprinkle of almonds to add some crunch. This classic Sicilian dish seemed like the perfect way to end our holiday.

Soon after, we were boarding the plane at Catalana airport taking in the magnificent views of Mount Etna in the distance.

My oh my, I just loved eating real food in Ragusa Sicily. If I were asked to sum up my food experiences, I would say – simple food, made with fresh seasonal ingredients that pack the flavour.

After all the food I tasted that week, I now have some great ideas of how I can make entirely real food versions of some of these classic Italian dishes you see here on this post. I will add links to the recipe posts here once I have finished experimenting with the ingredients and fleshed out the recipes.

I wasn’t planning on talking about weight loss until I had been blogging for a while and I started to feel more comfortable with putting myself out there to the world. But, I had a change of heart when I hopped on the weighing scales on my return. Despite being mindful about choosing real food options or as close to it as possible, I was still expecting a weight gain, because well, that’s what usually happens after a holiday, right?

So imagine my surprise when I actually lost weight. In fact, I LOST 8.8 lbs. What?!

How? Well, here’s what I think happened.

REAL FOOD FOR THE WIN!

You can also stay up to date with new posts and healthy REAL FOOD recipes by subscribing to The Real Food Geek mailing list below.

Eating Real Food on No Man’s Fort, The Solent

Welcome to The Real Food Geek

Join me as I attempt to abandon the bad eating habits of a lifetime in favour of a healthier lifestyle without sacrifice.