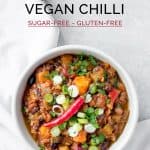 Are you looking for a comforting meat-free dinner with bucketloads of flavour? Well then, this Slow Cooker Vegan Chilli is where it’s at. An epic feast, that’s rich, spicy and nutritiously-dense. You’ll be going to bed happy tonight after tucking into the best ever chilli!

How’s your week been? I’m doing good, mainly because I’ve been excited to bring you this tasty little bowl of goodness – a Slow Cooker Vegan Chilli.

Now, depending on where you are in the world, to you this dish maybe Chilli, Chili, Chilli Con Carne, or being Vegan you may even want to call it a Chilli Non-Carne. Whatever you name it, this recipe is for you if you are:

What makes this Slow Cooker Vegan Chilli “the best” is all thanks to its highly nutritious and delicious ingredients.

You’ll be eating the rainbow with this Chilli. The recipe includes:

Why should you eat the rainbow? Well, by eating a variety of vegetables (and fruits) in a wide range of colours, you will be giving your body the essential nutrients it needs, benefiting from all the unique health benefits each different veg can offer you (Source).

When you look into the history of where Chilli Con Carne originates from no one seems to have a definitive answer. According to National Geographic, some people say Mexico, others are convinced it’s Spain. What also appears to be up for debate is whether Chilli should or should not include beans. The argument for and against beans seems evenly split down the middle based on where you live in the world.

I’m based in the UK and every Chilli I’ve ever eaten proudly includes beans. Specifically red kidney beans. I guess you could say it may be something to do with where I grew up, but I’m happy to say, this recipe is all “for” beans. Beans are an excellent plant-based protein which is vitally important if you are vegan and do not get any protein from animal sources.

Furthermore, beans can be a great help when it comes to controlling your appetite. They contain fibre which slows digestion and creates a feeling of fullness and satiety (Source). Over a day, this may prevent overeating. And if consumed consistently, over time may even lead to weight loss (Source).

A standard Chilli Con Carne recipe will likely have a combination of herbs and spices, and this recipe is no different there, with its mix of chilli powder, cumin, coriander, paprika and oregano.

Where this recipe is different lies in a couple of transformative (in my humble opinion) yet straightforward twists.

Chocolate is a relatively common modern ingredient added to Chilli. It adds to the depth of flavour, providing much-needed richness. But don’t worry, your Chilli won’t have an obvious chocolate flavour. Cocoa powder is my preference over dark chocolate because I always have Cocoa Powder in my cupboards. If I have a slab of chocolate in the house, it will be eaten within a day.

Granted, you’ll often find cinnamon in sweet recipes, but it adds something special to savoury dishes too. It has a warm, woody vibe and brings a little sweetness to the Chilli Spice Mix. Your Chilli won’t taste of cinnamon in any way, it will merely compliment the other spices.

Coconut Aminos is a brilliant ingredient, often used as a soy sauce replacement. It adds a deep, rich, umami (or savoury) flavour to stews and works particularly well in Chilli. I often use it instead of Worcestershire Sauce – an ingredient I used to love adding to all kinds of stews until I realised how much sugar it contains. And, sugar causes my cravings to spiral out of control!

As well as adding great flavour to food, Coconut Aminos is gluten-free, MSG-free, non-GMO, and vegan. And, according to Dr. Axe contains 300% less sodium than the “leading” soy sauce.

Coconut Aminos used to be a hassle to get hold of. You would likely have had to venture to a health food store to find a bottle. But these days you can find it in most supermarkets, and there are loads of online stockists. I’m currently using this Cocofina Organic Coconut Amino. It makes all the difference (#notsponsored!).

THE PERFECT MEAL FOR MEAT-FREE DAYS

Red meat is high in protein and has its place in a healthy diet for the meat-eaters among us. However, speaking from experience, consumption of red meat can soon get out of control if you’re not careful. There was a time when I would most likely be eating some sort of meat on most days.

More and more these days, I am recognising the importance of cutting down on red meat. Don’t get me wrong, I am a meat-eater, and I have no plans to give up meat entirely, but I limit red meat consumption to once or twice per week with particular emphasis on portion size and I plan more vegetarian and vegan days into my weekly meal plans.

It’s taken a little bit of getting used to but’s it’s all been about making those vegetables the main ingredient rather than relying on meat to be the star of the dish.

This Chilli is a prime example of making vegetables the star ingredients. The beef in a traditional Chilli Con Carne is really just a carrier of those truly distinctive Chilli flavours. In this vegan recipe, the vegetables and beans replace the meat as the carrier to deliver a genuinely comforting dish, that even the most avid meat-eater will enjoy.

If you’re not used to batch cooking, let me inspire you to jump on board the batch train. It’s truly a game-changer when it comes to reclaiming your time.

The idea of batch cooking is to cook larger portions of foods that can be portioned up and refrigerated or frozen so that you can have healthy homemade ready meals available for times when you don’t want to cook from scratch.

Some people batch cook at weekends, so they have meals available throughout the week. Some people choose to stock up the freezer and pull out portions much more randomly, so they are not eating the same thing every day.

Either way, the principle is to COOK ONCE and EAT MULTIPLE TIMES. This will:

Are you thinking of making this Slow Cooker Vegan Chilli? I’d love to know what you think. Get in touch in the comments section and let me know!

Looking for more comfort food recipes? Check out these ideas 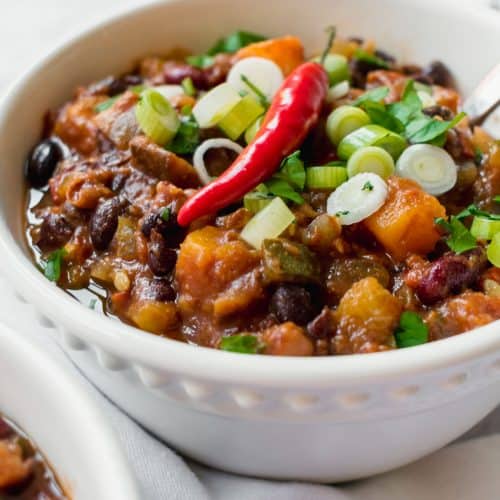 Are you looking for a comforting meat-free dinner with bucketloads of flavour? Well then, this Slow Cooker Vegan Chilli is where it's at. An epic feast, that is rich, spicy and nutritionally-dense.
4.25 from 8 votes
PRINT RECIPE PIN RECIPE
Prep Time 10 mins
Slow Cooker Time 4 hrs
Course Dinner
Cuisine Mexican
Servings 8 People
Calories 244 kcal

LEFTOVERS: This Slow Cooker Vegan Chilli will last in the refrigerator for 4 – 5 days and will maintain quality in the freezer for up to 4 months. Once the Chilli has cooled completely, divide leftovers into individual portions and transfer to airtight heavy-duty freezer bags or glass containers. Refrigerate or freeze within 2 hours of being left at room temperature to avoid bacteria growth.  FRIENDLY ADVICE: Avoid putting leftovers in plastic containers. The tomato in the sauce will stain them orange and ain’t no detergent in this world getting that out!  HOW TO REHEAT: place the Chilli in a microwave-safe dish and heat for 4-6 minutes, stirring once halfway through.

You can also stay up to date with new posts and healthy real food recipes by subscribing to The Real Food Geek mailing list below.

Thank you so much for reading.

PIN THIS RECIPE FOR LATER

Welcome to The Real Food Geek

Join me as I attempt to abandon the bad eating habits of a lifetime in favour of a healthier lifestyle without sacrifice.